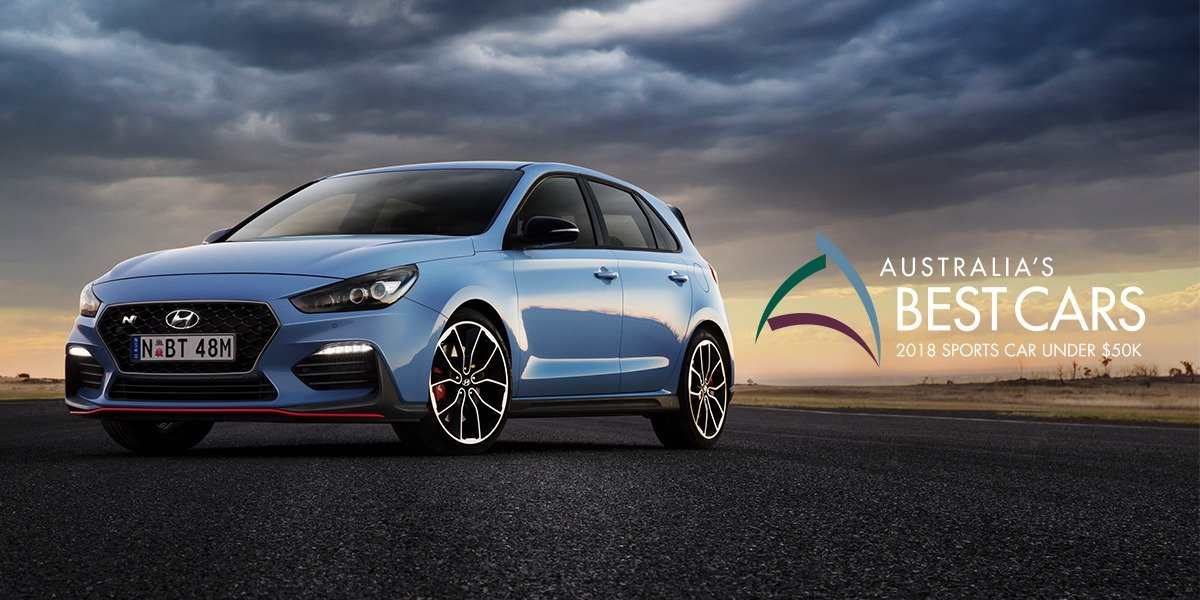 The i30 N, Hyundai’s breakthrough hot hatch, has won News Corporation’s Car of the Year Award.

A little more than a decade after the original i30 collected its first gong in our annual awards, the i30 N signals a new chapter for the Korean maker, which has proved it can compete on equal terms with the world’s finest hot hatches.

“If BMW did a front-drive performance hatch, it would be like this,” says judge Bill McKinnon.

That’s no coincidence, as the i30 N’s development was overseen by Albert Biermann, a former chief engineer of BMW’s famed M division, responsible for classics such as the M3.

“It’s a car that will still be talked about in 10 years’ time,” says fellow judge Iain Curry.

But the i30 N didn’t cruise to victory in our annual contest. This year’s field was a strong one and a tie-breaker was needed to split the i30 N and Subaru’s brilliant Forester SUV.

The Forester sits at the top of the class in the most fiercely contested segment in the new-car market, family SUVs. Its list of standard safety features is better than a lot of cars costing twice as much, its price is razor sharp and the cabin has acres of space for a growing family.

Our annual contest kicked off with a comprehensive tyre-kicking session, where judges pored over prices and features for the 10 finalists. We looked at how they compared with their most immediate rivals, then judged them against our criteria.

Value for money was high on the priority list, as were safety, performance, design, technology and cost of ownership.

At the most affordable end of the market, the Volkswagen Polo impressed the judges with its roominess and refinement. It’s more expensive than the opposition but rewards with a great drive, a classy cabin and surprising urge from its tiny three-cylinder engine. Ultimately it was let down by its transmission, though. At speed it shifts smoothly and swiftly but it stumbles during low speed parking manoeuvres and in stop-start traffic. Best in class but not Car of the Year.

Next, the Kia Cerato nailed value for money. A size bigger than the Polo, it is a similar price, drives well and comes with an industry-leading seven-year warranty. But the engine is a little old school. It does the job but isn’t a revelation.

The last of the conventional “cars”, the Mazda6 was beautifully appointed, powered by a punchy new four-cylinder turbo and sporty through the corners. It made it through to the second round of on-road tests and finished on the bottom step of the podium.

Skoda’s Karoq was another to make it to the second round of judging. Judges loved the clever touches in the cabin — the umbrella, detachable torch and smartphone/tablet holders for the kids in the second row. The engine is a corker and the crystal clear centre screen was easy to navigate. Judges felt the value wasn’t class-leading, though, and some safety options were bundled in option packs rather than standard.

The Peugeot 5008 endeared itself with a cabin that was genuinely different from its competition, yet practical as well. The large digital panel in front of the driver — taking the place of standard dials and readouts — can display as much or as little as you want, at its simplest showing your speed and the prevailing limit. As with the Skoda, price was its enemy and some judges felt the smooth but small 1.6-litre turbo might struggle when all seven seats were in use.

The Volvo XC40 was another strong contender, with modern and fresh cabin design and oodles of oomph from the turbo engine. But it’s pricey and you have to pay extra for safety gear that is standard on cheaper cars. Very un-Volvo.

Holden greeted the judges with the big, powerful and well equipped Acadia. The full-size American SUV is the best of the petrol-powered seven-seaters. It’s surprisingly agile for a big SUV and sharply priced. “It’s a lot of car for not a lot of money,” says McKinnon. But judges noted it was thirsty around town and the skinny space-saver spare was hard to get to.

It was also overshadowed by the excellent new Hyundai Santa Fe. Bigger than its predecessor but still small enough to manage around town, the seven-seater is the new benchmark in its class. The cabin is cleverly thought out and the standard safety technology in the top of the range Highlander is comprehensive. A great car but ultimately the carry-over diesel engine worked against it in such a tight contest.

That left two contenders for the crown. Judges overwhelmingly picked the i30 N and Forester as standouts but disagreement arose over the pecking order.

Fans of the Subaru pointed to the cleverly designed cabin. The tall roof, large glass area and thin pillars provide excellent all-round vision and a cavernous, airy and comfortable space.

Safety is both comprehensive and cutting edge, including a world-first camera to detect the driver’s eyes straying from the road. Others were impressed by its authenticity — in a world of faux-wheel drives, the Subaru has full-time four-wheel drive, decent road clearance and genuine off-road ability. At the same time, it’s comfortable, quiet and composed through corners.

The i30 N fans argued it nailed the brief of hot hatch, with a snarling exhaust note, outstanding grip and potent acceleration. They were also impressed by the adjustability — you can tweak the throttle response, suspension, steering, exhaust sound and even the characteristics of the standard limited-slip diff. It’s firm but liveable as a daily driver.

Both had flaws. The Hyundai’s cabin was a bit of a visual let-down. The Subaru’s engine wasn’t at the pointy end in its class.

The Hyundai prevailed because of the brand’s willingness to back its product. The Forester has a sub-par three-year warranty, while the i30 N has five-year cover that includes untimed track days.

Call it splitting hairs, but that’s how close the contest was.

It became apparent early in the piece that this field was an incredibly strong one. In previous years, favourites have announced themselves early — but not this time.

Check out full story on news.com.au