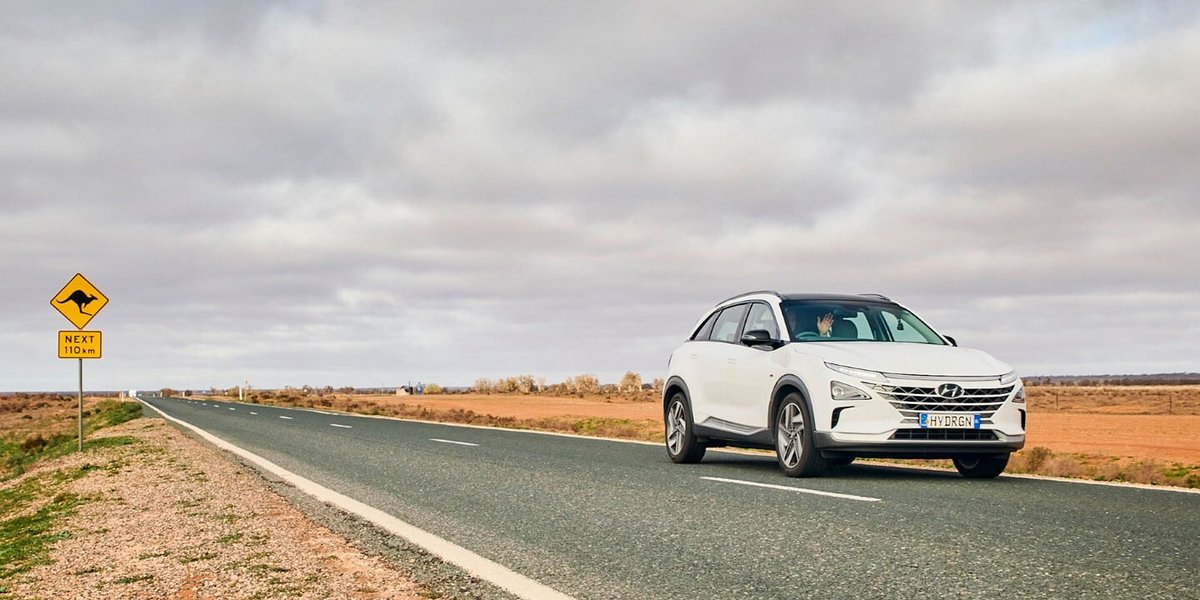 An Australian team driving a Hyundai NEXO fuel cell electric vehicle (FCEV) has broken the world record for the longest distance travelled in a hydrogen-powered vehicle on a single tank.

Australian Hyundai rally driver Brendan Reeves drove a production-spec NEXO for the record attempt, starting from the Essendon Fields in Melbourne. After 807km of efficiency-focused driving, Reeves arrived in Broken Hill with plenty of range still showing on the vehicle’s trip computer.

The journey then continued to Silverton, an outback town on the outskirts of Broken Hill, best known as the setting for 1980s post-apocalyptic action film Mad Max 2 (aka ‘The Road Warrior’), and the car then travelled some 60km beyond before the NEXO’s hydrogen tank was depleted on the Wilangee road beyond Eldee Station.

The total distance driven was 887.5km, according to the NEXO’s own trip computer, exceeding the previous world record of 778km set by French aeronaut Bertrand Piccard, also at the wheel of a NEXO, on his journey across France from Sarreguemines to Le Bourget.

A representative from the RACV was on hand to seal the NEXO’s tank at the start of the journey, and an NRMA representative confirmed the validity of the tank seal at the end.

The distance measured by an isolated GPS unit on board the NEXO registered 903.4km, while the Google Maps distance showed 905km travelled. However, for the purposes of the test, the NEXO’s own trip computer is used as the official distance recorder. 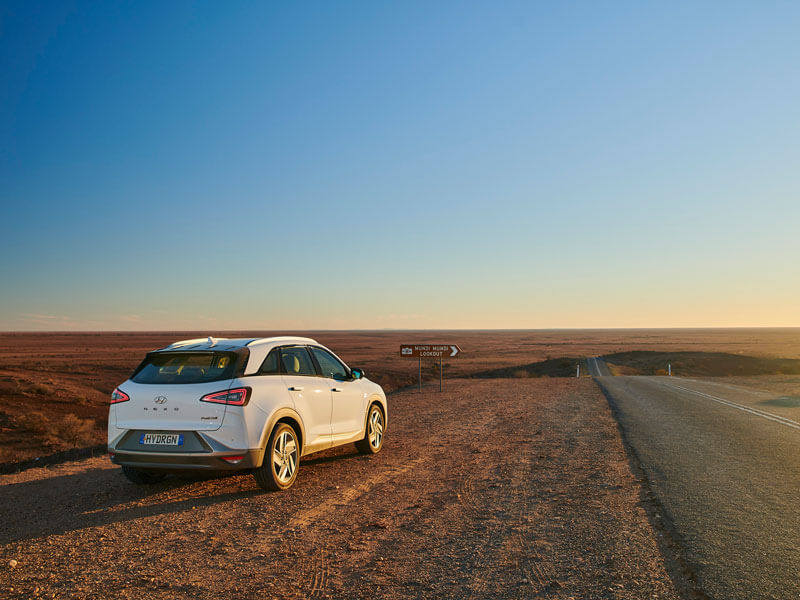 “Being a rally driver, I’ve always wanted to achieve a world record, but I could never have guessed it would come about this way,” said NEXO pilot, Brendan Reeves.

“As we set out from Essendon Fields in the early morning, I found NEXO immediately familiar and easy to drive - the controls are intuitive and easy to use, the driving position excellent and seats very comfortable.

“NEXO is in its element on the open road, with its long range, peaceful and refined cabin, and smooth, near-silent fuel-cell electric powertrain,” he said. 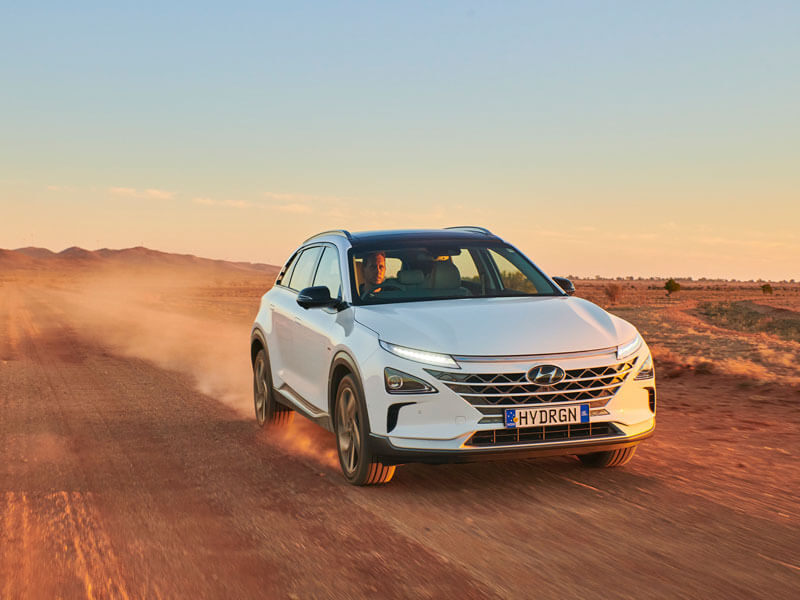 “I was constantly checking the NEXO’s efficiency readout to maximise the distance I was getting per kilogram of hydrogen. I found that by using techniques from rally driving, such as looking as far down the road as possible, as well as tips I have learned from my dad for driving a truck efficiently over long distances, it’s actually possible to go way beyond NEXO’s official range.”

The trip took 13 hours and six minutes at an average speed of 66.9km/h (see link below to tech data sheet). The NEXO’s low fuel warning first lit up at 686km, with over 200km of range left from that point. The fuel light started flashing after 796km, with 90km of real range remaining.

During the trip the NEXO consumed a total of 6.27kg of hydrogen, at a rate of 0.706kg/100km. It purified 449,100 litres of air on the journey - enough for 33 adults to breathe in a day - its plastic exhaust pipe emitting only water in vapour and droplet form throughout the trip. It emitted zero CO2, where a standard Internal Combustion Engine vehicle would have emitted about 126kg of CO2 over the same distance.

Hyundai recently imported the first 20 zero-emissions NEXO FCEVs into Australia, which are now deployed in a variety of roles with the ACT Government. 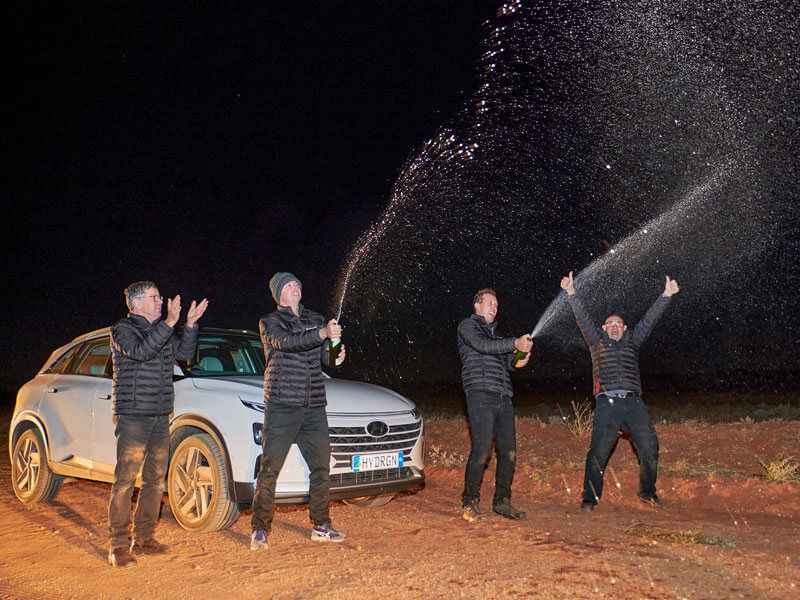 A hydrogen refueler in Brisbane is expected to be completed by the end of 2021, with new stations also planned for other states and territories.

NEXO is Hyundai’s second-generation mass production fuel-cell electric vehicle and offers a range of 666km (WLTP) with a refueling time of three to five minutes, in a futuristic SUV package.

Hyundai’s NEXO is the first hydrogen-powered car certified (ADR) for sale in Australia. It is also the first fuel cell electric vehicle to be awarded the maximum five-star overall safety rating by Australia’s ANCAP.

With NEXO as the technological flagship of a diverse portfolio of green vehicles, Hyundai is only brand in Australia to offer hydrogen fuel-cell electric, hybrid (IONIQ), battery electric (IONIQ and Kona) and plug-in hybrid (IONIQ) vehicles.